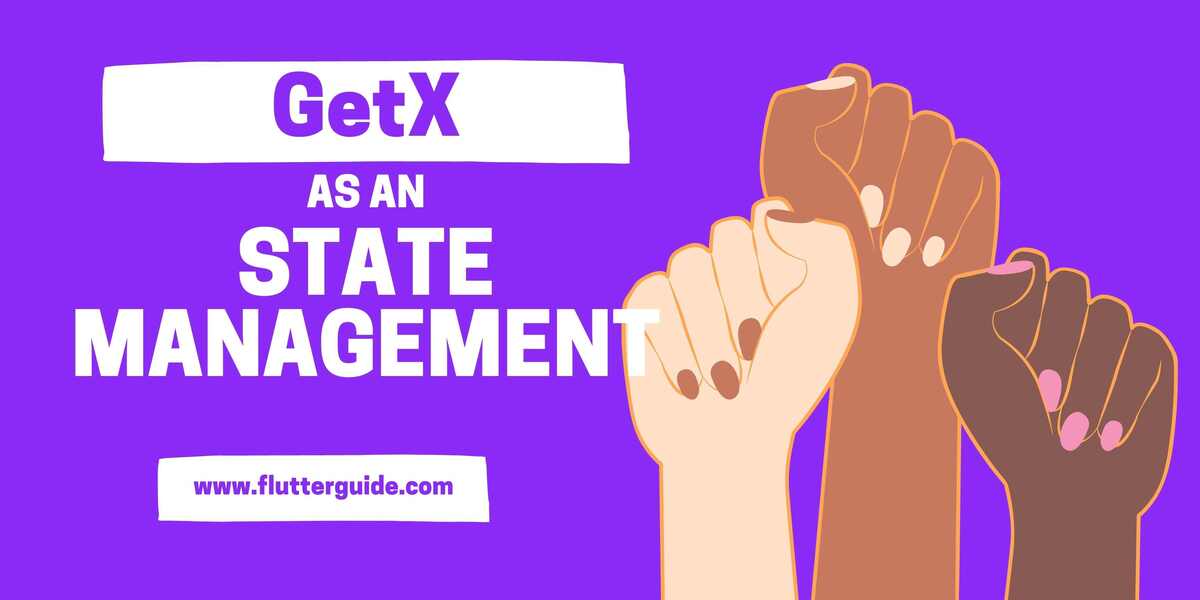 GetX is one of the popular state management package among the flutter developer. GetX is not just famous for high performances state management but the combination of intelligent dependency injection and route management also. So, It is the most liked packages with the likes of 7.56k as of now. As there are a lot of state management tools in flutter, GetX tops the list by being fast, stable, extra-light and powerful solution for flutter framework.

Why GetX is getting popular among the Flutter developers?

Developers are always trying to manage their application state in simple and well organized fashion while improving performances. GetX helps developers realize a high level of productivity through easy and pleasant syntax without sacrificing app performance. And GetX package helps the flutter developer to achieve it with these features:

GetX is focus on high performance along with the minimum consumption of resources. Since, it doesn’t use Streams or ChangeNotifier.

Using simple and easy syntax, GetX will save hours of development and provide high performance. The developer should be careful about removing controllers from memory in general. This is not necessary with GetX because resources are automatically removed from memory when they are not in use. We must explicitly declare “permanent: true” in our dependent if we want it to be kept in memory. That way, in addition to saving time, we are less at risk of having unnecessary dependencies on memory.

GetX helps to maintain the clean architecture by total decoupling of the View, presentation logic, business logic, dependency injection, and navigation. We do not need context to navigate between routes, so we are not dependent on the widget tree (visualization) for this.

Context is not required

In an application, context is very important since it is a link to the location of a widget in the tree structure of widgets. And sending the context from view to controller is tedious. But in GetX, we can access controllers within another controller without any context.

With GetX we don’t have to write boilerplate code like bloc pattern and other state management tools. Since we don’t have to create classes and event like bloc, we can achieve the high performances and productivity with much faster and less code.

Add Get to your pubspec.yaml file:

Import get in files that it will be used:

The generated code from the main.dart file by rendering Home is as follows:

Then our code with the GetX environment set up will be like:

Before jumping into the GetX statemanagement, we must have knowledge about the controllers. Controllers are means to give control to the parent widget over its child state which contains all of your business logic for the application. This will make it easy to track different issues or errors. And GetX also contains the class called GetxController. We have to extend our controller from GetXController.

There are three popular methods which is also called lifecycle methods in the GetXController. They are onInit(), onClose() and onReady(). When your controller is created in memory, the onInit() method is called immediately, and the onClose() method is called when it is removed from memory. Soon after the widget has been rendered on the screen, the onReady() method will be invoked. Using this methods, we can replace the initState() and dispose() methods in StatefulWidget.

Non-Reactive state manager is simple state management in GetX which updates the UI only when we want to. The main point of using Simple state manager is to avoid the Streams and ChangeNotifier with uses of extremely low resources. So in order to listen the changes of state, update() method is used. We must call the update function after making changes to our state in our controller to tell the widgets that are listening to the state.

Let’s us see the example of counter increasing and decreasing:

In the above code, update() function is called after each changes in the state.

For Simple state manager, GetBuilder is used to change the view based on the changing state.

Using the update() method to listen after every changes in state is tedious. But in reactive state manager, our data depends on Streams. When data changes, all listeners will be notified right away. In order to do that in reactive approach, we need to create our variables observable. It helps to our widgets to keep track of changes in our variables and update on UI immediately. One of the method to convert the variables into reactive variables or observable variables is using GetX or ObX. Both of them is used as reactive state manager but GetX has lifecycle methods like init() and dispose() but ObX doesn’t.

Let’s us see the example of counter increasing and decreasing:

In the above code, we make the variable reactive by adding .obs at the end of the variables. This way code became shorter as easy to read.

For Reactive state manager, Let us use the GetX to change the view based on the changing state. First replace the dependency injection with the ReactiveStateController as below.

Then replace the GetBuilder in the home with the following code:

ObX is lighter version of GetX. It is much more simple than GetX. We don’t have to initialize the Controller in ObX. we just have to wrap our widget from it.

With the use of GetX package, we no longer need the StatefulWidgets in our application. we don’t need to waste our resources by making StatefulWidgets since, we can handle our UI state in simple and cleaner way using GetX or ObX than SetState.

If think otherwise about GetX? Read this article about Riverpod.